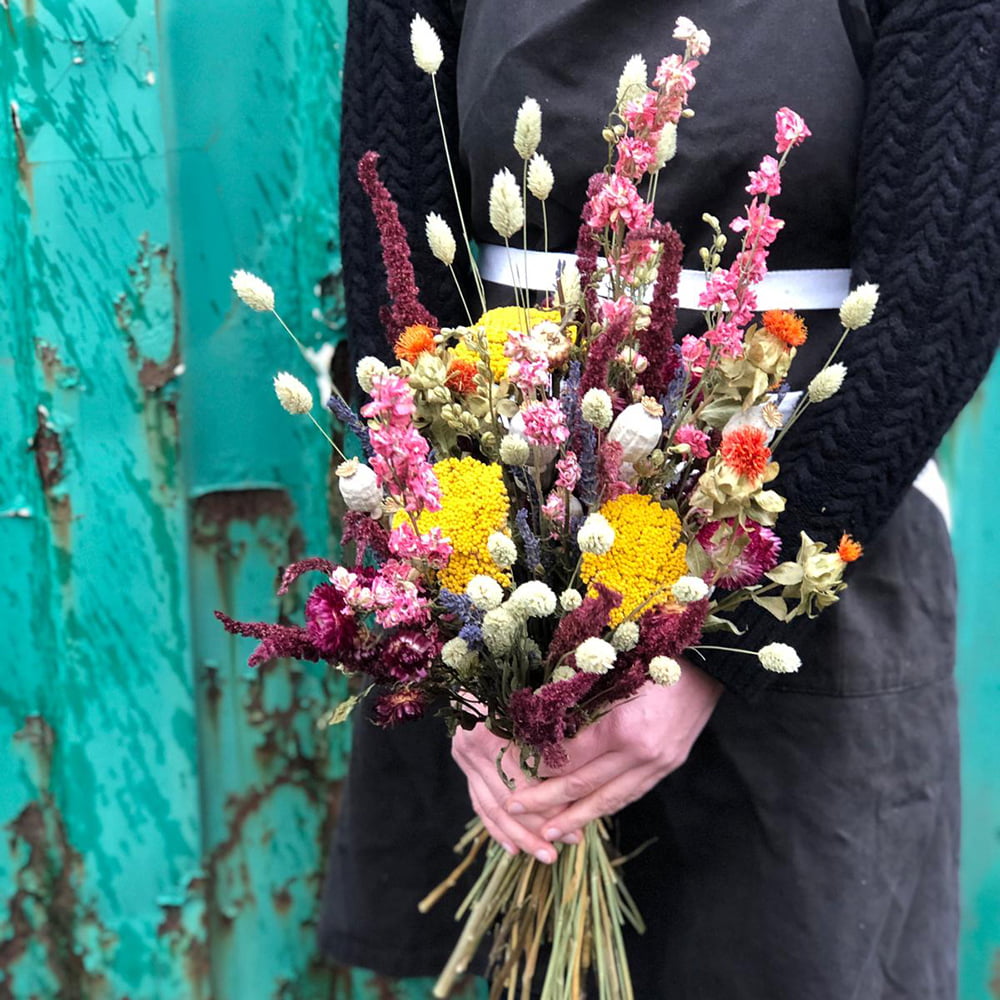 If, in clicking into a blog called ‘Why Dried Flowers?’ you were hoping to find a bullet point list of reasons to use dried flowers, I’m afraid I’m going to disappoint you by going about this via a wordy, rambling, train of thought kind of route. Verging on a memoir, this is not so much a scientific dossier of pros and cons but a personal reflection on how I arrived in a loving and respectful relationship with dried flowers. Sorry about that, and I don’t blame you if you’re bowing out now. If you’re carrying on, thanks and good on you.

Flowers in the First Place

I couldn’t say with my hand on my heart, as some people’s autobiographical blog posts or book introductions do, that I’ve always had a passion for flowers, that I knew the names of all the flowers in the garden when I was so high and that in starting out as a florist I was realising a life-long dream. Although, it is neither the case that I never liked or enjoyed or saw beauty in flowers – I’m not a maniac!

Seeing beauty in flowers is no more uniquely virtuous than enjoying music – it’s the rule, not the exception and it seems to be one of those things that’s hard-wired into humans. Like enjoying sunsets or rainbows, it’s just about universal.

But what could perhaps be described as a deeper appreciation for flowers seemed to spring on me and germinate over a period of a few months several years ago. It is possible that flowers and, maybe more accurately, creating and designing with flowers were what I needed at the time and because of that, flowers began to shine forth to me.

I would describe myself at that time with the old cliche of ‘being at a crossroads in life’ (were I not averse to using such cliches if I can avoid it and if it didn’t seem so inaccurate an image given that a crossroads tends to give you three or four well-defined options and what I had in front of me looks more like a bowl of spaghetti in my retrospective imagination.) There were an untold number of ways I could have gone, each with an indistinguishable ending and all tangled confusedly together in a way that made it seemingly impossible to think through all of them in a methodical and logical way.

My unconscious solution to that seems to have been picking an idea out of a clear blue sky, getting a feeling that it was right, or at least as good as anything else, and going with it. At the time just having a direction to go in gave me a lot in the way of feeling a bit more grounded, a bit more focused, a bit more forward-looking and a sense of relief at having a plan, any plan.

That plan happened to be starting a college course in floristry – a city and guilds level two diploma in floristry at Moreton Morrell college, about fifteen minutes drive away from my house. 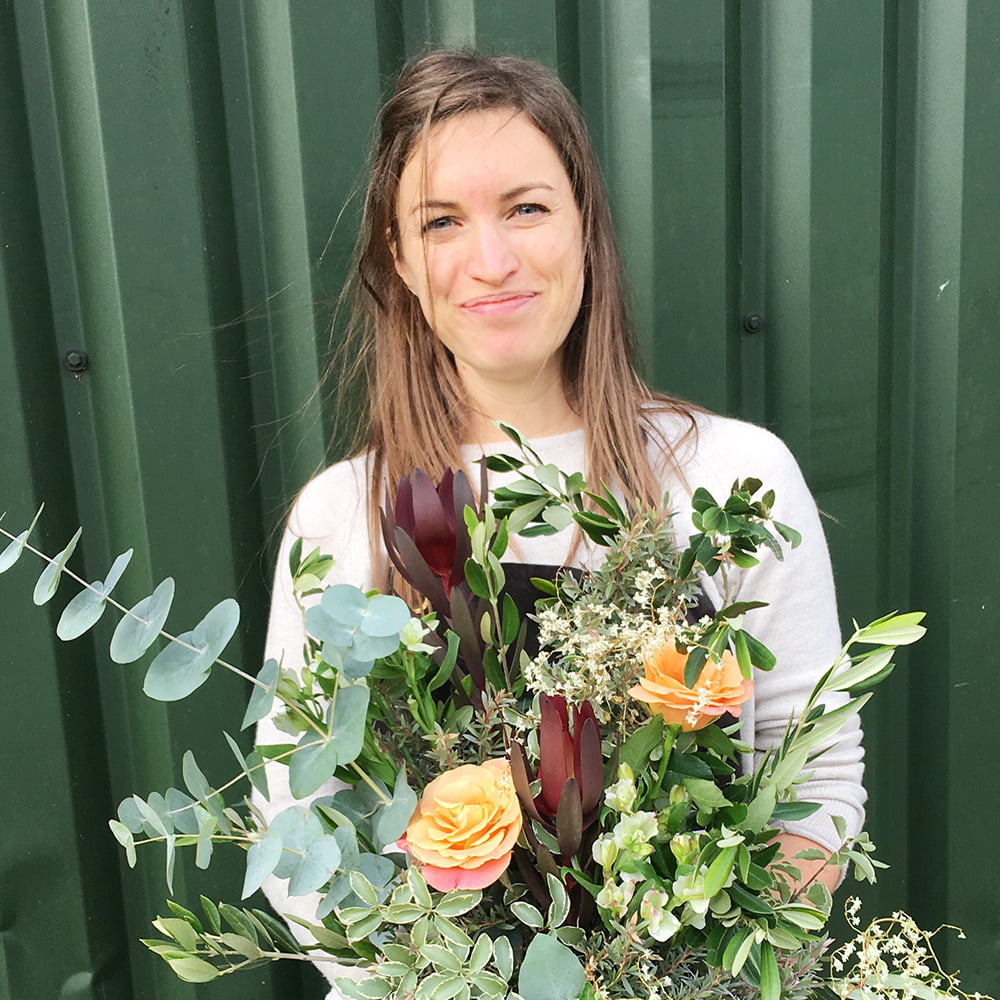 At the time the plan extrapolated to doing floristry competitions, eventually winning gold at Chelsea Flower Show and using that accolade to get lots of work doing flowers for people’s weddings.

If nothing else, this is a peach of an example of the way things don’t work out the way you think they might because a little way into something you’ve planned you realise you don’t actually want what you were planning to get in the end. For a start, I found out through doing my first competition that I don’t like competition floristry. Although I actually happened to win the first competition I did, so no accusations of sour grapes please!

Having deviated from my wonderfully naive initial plans and schemes for my new floristry life, I got stuck into honing my craft. Working in a high-street florist shop, doing weddings, events, funeral flowers and trying to soak in as many different experiences as I could.

The Dawning of the Dried Flower Era

It was in college when I first used dried flowers to make a hand-tied bouquet. We actually went on a college trip to a wholesaler to source some dried or artificial flowers to use in class that afternoon. Me and two of my newly-made flower friends on my course chose a few wraps of dried flowers to split between us. We also had great hot chocolates from the farm shop cafe onsite at the wholesaler. All good omens.

That afternoon back in the classroom at college, making my dried hand-tie, I fell a bit in love. I was swept off my feet by the natural shabbiness and gorgeously muted colours of dried flowers. They have that disheveled-cool personality that some lucky people can pull off.

After that I got side-tracked into experimenting with what else I could use dried flowers for and techniques for drying my own flowers. I started seeking out second-hand books written by dried flower experts of the past, soaking in their ideas and expertise and thinking of ways I could bring them to life for myself. 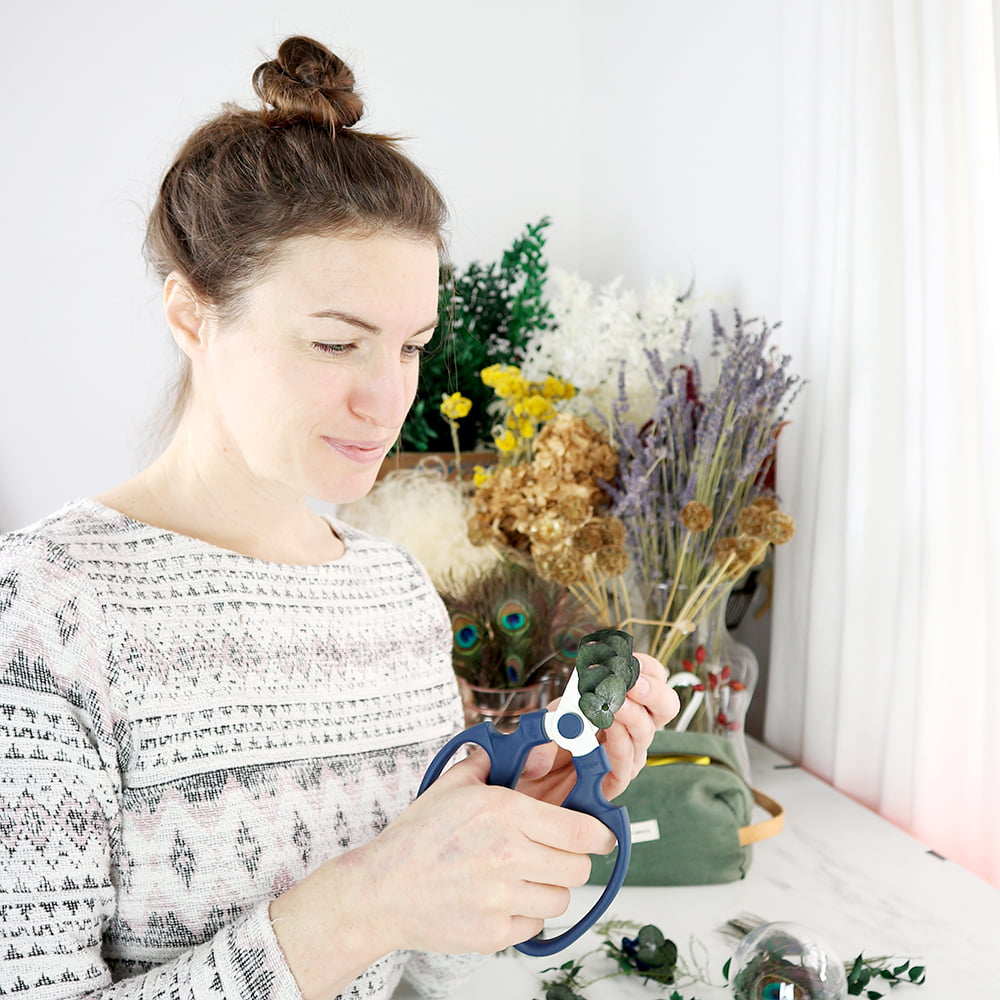 Since its inception, my crush has developed into the kind of long-term relationship in which trust and respect are heavy players. The more I learn, the more I find there is to love. Dried flowers have many virtues other than the aesthetic. Chief among them being their steadfast, long-lasting nature (a trait which also bestows upon them that trendiest of virtues – they are eco-friendly.)

Away from Mary Elizabeth Flowers I still work with fresh cut flowers and thoroughly enjoy their charms, but their biggest draw-back is their understandable refusal to stay beautiful for long and to demand fresh water and a cool environment for the whole of their short lives.

Next to a wood-burner in a cosy cottage, fresh flowers look good for the time it takes to get a quick photo of your insta home for the gram. Within hours it will be game-over. Dried flowers on the other hand will be quite cheerful about their prime position on the hearth.

Compared to fresh cut flowers, dried flowers have a laid-back, ‘low-maintenance’ personality. They are the Phoebe to fresh flowers’ Monica.

However, laid-back is one thing but no one likes a doormat. They do have certain standards and expectations.

All a dried-flower asks of you are three things – don’t let them get wet, don’t put them in direct sunlight (unless you don’t mind them losing their colour) and don’t be unduly rough with them (they’re laid-back but they’re not invincible) – and they will continue to serve you for years. Not outrageous demands I’d say.

I find so much pleasure in dried flowers and starting up Mary Elizabeth Flowers was a way to spread that joy and give myself a legitimate reason to keep playing away in my little workshop.

And since this blog post seems to have taken a far more gushing turn than I had intended, I should probably reign myself in now and just say, thanks. Thanks for reading, thanks for visiting the website and thanks if you’re one of the lovely people who has or will one day be a customer of Mary Elizabeth Flowers.

Sign up to receive occasional news, offers and insights from Mary Elizabeth Flowers, with a 10% off voucher to spend on your first purchase.

This website uses cookies to improve your experience while you navigate through the website. Out of these cookies, the cookies that are categorized as necessary are stored on your browser as they are essential for the working of basic functionalities of the website. We also use third-party cookies that help us analyze and understand how you use this website. These cookies will be stored in your browser only with your consent. You also have the option to opt-out of these cookies. But opting out of some of these cookies may have an effect on your browsing experience.
Necessary Always Enabled
Necessary cookies are absolutely essential for the website to function properly. This category only includes cookies that ensures basic functionalities and security features of the website. These cookies do not store any personal information.
Non-necessary
Any cookies that may not be particularly necessary for the website to function and is used specifically to collect user personal data via analytics, ads, other embedded contents are termed as non-necessary cookies. It is mandatory to procure user consent prior to running these cookies on your website.
SAVE & ACCEPT